The ROI of Illuminating the Digital Darkness

Dark events, data, processes and patterns all have enormous potential to add new insights into how an organization approaches its mission. Spending some time finding dark events can pay back operationally in a quick fashion, but these events and patterns can help make better decisions and avoid risks. 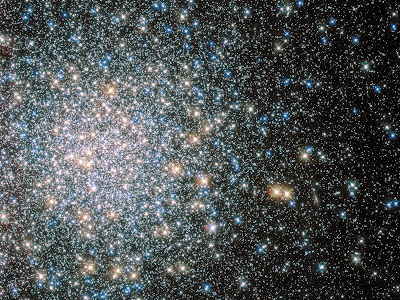 It may be But as with any source of information, the value it generates depends upon a number of factors that generally focus on the value of the end result of some desired action, outcome or provides a more detailed content about a known event.  In this way, it is revealing the “unknown within the known event” adding significant richness that can provide real value to decision makers as well as automated rule-based decision systems.   The example described below uses the depiction described in Dark Event Post # 2 and walks through a simple example of how unproductive time can be both discovered and re-covered.

As mentioned previously, we can see in the Figure 1 below the known steps (shaded in light blue) in a typical transaction system.  However, between steps 4 and 5 (Transaction Paid) are a number of other steps that are happening (shaded in gray) that detail a customer service intervention process that corrects the data on the customer transaction so it can process to conclusion. 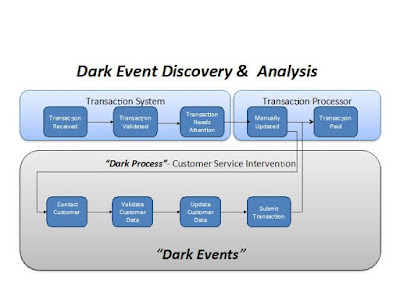 So, the question some questions we might ask here are:

·         How much time did each newly discovered event consume?

·         Were all actions taken in compliance with standards?

·         Were there other actions taken that are not part of the process?

The answers to these questions can be found by examining the new event log, either created from new collectors or through an “event mining” exercise, that includes the time spent on all events, including the newly illuminated dark events.  When we look at Figure 2 below we see that a total of three customer records were reviewed and updated for a total time of 30 minutes, however in that time-frame, a number of different issues were addressed, some with potential ramifications as described below. 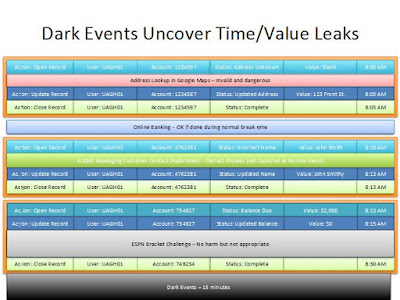 Specifically, we can see:

As mentioned earlier, unless they are truly random, business events are encapsulated by business processes.  The processes in turn are designed to provide some type of value to the business to the organization that is quantified by some means (number of widgets per hour, etc…) and converted to a monetary format (Dollars, Euros, Yen, etc..).  Therefore, each process has an expected value it needs to deliver to the organization.  When it is delivering something less than that expectation, it is in essence “leaking “ some of that expected value and is therefore a value leak.  Value leaks can also be seen as waste (or in lean terms muda), which adds costs and drains value from a process.  A good example is the U.S. healthcare system which has an estimated value of $2.7 Trillion per year, of which $1.35 Trillion had been attributed to waste!  On a smaller scale, we can see in Figure 2 above that of the time between 8:00 AM and 8:30 AM, 20 out of the 30 minutes of work time were spent on activities other that those that add value.  While this is normal a rather trivial example, imagine that event occurring multiple time a day and not just to one agent but to 1,000 agent or more!  In Figure 3 below we can see the potential value of improvements in value leak reduction, not including the potential leak associated with the potential privacy violation uncovered with the first record being reviewed! 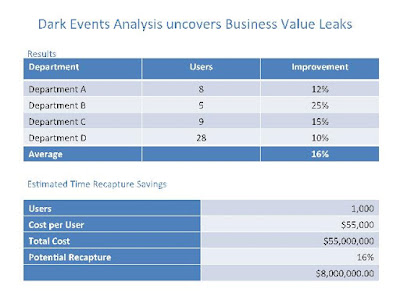 Dark events can be costly in multiple ways.  The effort to understand dark events and the associated value leaks represent pays for itself many  times over and in some instances,  can be the catalyst for major productivity and profitability gains. If you have questions or a need to discuss this ROI opportunity further contact Dr Edward M L Peters whom I thank for sharing this series with me and helping folks understand the opportunities and threats involved with Dark Events.