BoxWorks 2018: Morphing into a Bigger BOX

Attending BoxWorks 2018 this week, there were some new and compelling themes for organizations on their digital journeys. There were over 7000+ participants, a big leap from my last BoxWorks two years ago. Since 2016 Box has grown in size and ability to help organizations with content, to be the "Switzerland of  Content" that is open to all streams of content including image, voice and video. Well Box is not satisfied and is moving to add intelligence and context to support a wide range of digital challenges. 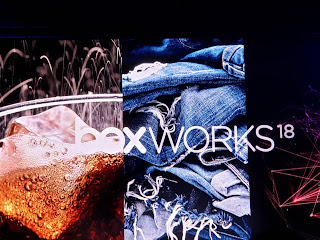 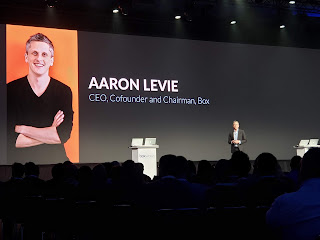 Aaron Levie, the CEO of Box, laid out some ambitious goals for his organization to become not just a content platform, but a platform the can support both the Digital Work Place which according to Aragon Research requires a Digital Work Hub  and Digital Business which according to Aragon requires a Digital Business Platform (DBP). While Box can certainly expand it's impact to both, but this is going to require a significant evolution of Box and it's supporting technologies and partners. Since Box is extreme in it's openness and is investing north of 20% of it's revenues in R&D, there is a a good chance this can happen. Aaron painted the Digital Challenge well and unveiled some if the aggressive steps Box was taking with some proof points to came later in the show with many enthusiastic clients on stage. 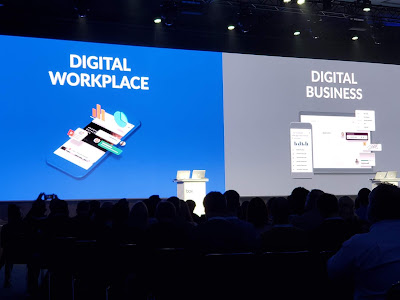 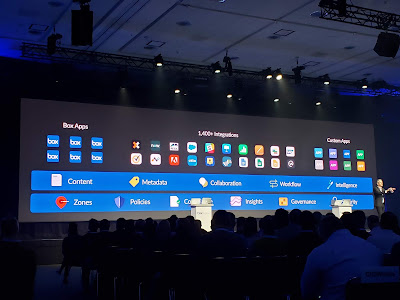 
Box is leveraging it's growing metadata around content to find new and exciting uses in tagging,  visualizing and enabling action from those tags including finding objects in videos in context. By adding machine learning (ML) the skill level of Box rises to learn, tag and categorize all forms of content for various uses downstream. This is called Skills and there are basic and custom skills for identified metadata tags. (see the turtle picture below)  Box will use various ML and AI partners starting with the normal known players of Google, IBM and Microsoft. 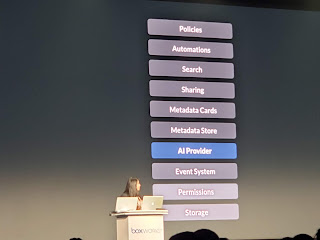 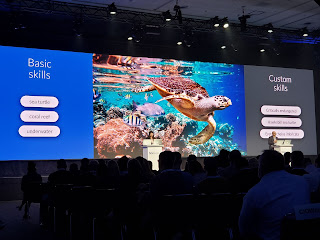 Box is also expanding it's notification of the presence of specific content and events through feeds. Box is also expanding it's ability to automate tasks in and around content and making those automation patterns available for reuse. While Box has some process definition and execution of processes inside, they plan to partner with others for production processes on operational data. Today they work with Nintex and Pegasystems mostly, but are open to working with others.

Many of the Box case studies on stage were around sharing and securing masses of heterogeneous sources of content.  There were glimpses of use for the new capabilities, but it is early. Box is gaining momentum and wants to be the "Switzerland of AI and Process" to help expand the scope of digital efforts, it's clients are dealing with and only develop features that the market doesn't support or can do better than it's partners. This is ambitious, but doable if they exercise a great level of wisdom and discipline in developing only what they do best. I was encouraged with the strategy and initial steps taken. Time will tell how far this will carry Box forward.

Up Coming Events for Collaboration: Second Half 2018

There is strong momentum around tactical topics like RPA, Low Code, Workflow and DML, but there are also some strong themes around strategic use of Customer Journeys, AI, Blockchain, Industry 4.0, Edge Computing and Digital Business Platforms (DBP). There are many things to talk about and would love to catch up with others in a number of up coming events. See below 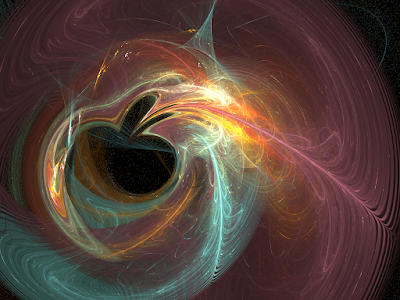 
These are exciting times of better customer interaction, improved business operations and new business models. Efforts are emerging and transforming to take advantage of the new digital world.  I am excited to interact with folks the rest of the year. See you soon.

Today some organizations have a sour taste in their mouth on digital and for good reason. There are those large consultancy firms that make one feel that they hold the recipes for digital and if you are willing to part with millions, they can make you a master chef. Your IT department, backed by deep research from high priced research firms, can also create and appetite and provide some teasing tasting plates of various digital technologies to choose from for the future. These approaches have created a bad taste in many organizations mouths. We would suggest that your organization is already digital and could be more digital with some practical steps unless your industry is under duress to create a new business model. Here are three practical approaches to create the “Digital Donuts” (Figure 1): 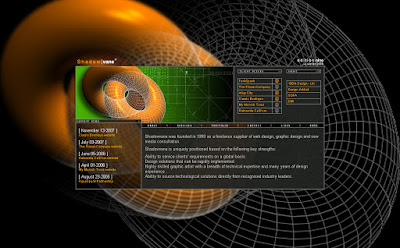 Today the customer experience is crucial for customer loyalty and attracting new customers. This doesn’t mean that your business model is broken, however it means your organization should make it easier to do businesses with now and in the future. There are a number of efforts that can supercharge the customer experience. Of course making things mobile, aggregating data from legacy systems and eliminating unnecessary keying through automation are no brainer efforts. Mapping and measuring customer journeys are a next step to remove friction in the processes and point out opportunities for more automation, chat bots and digital assistants. If your organization is bogged down with legacy overburden, significant wrapping may be required to create processes and customer journeys

While business optimization has been an ongoing drive for most organizations, these efforts can be supercharged by process mining leveraging time lines, predictive analytics, machine learning, and various forms of process automation. There is also a new emphasis on resource optimization and assistance through knowledge assistance for human and software bots. More straight through processing and assisted exceptions are growing in popularity which requires a more precise closed loop approach to decision management assisted by no code decision approaches.

In parallel to investments in the customer experience and optimizations, organizations can sandbox new business approaches by trying new processes in a fail-safe environment. When time to market makes a difference, buying additional companies that represent a great jump start to a new business model is typical for digitally savvy organizations.

Don’t let others make your organization feel digitally unsavory. There are many great digital recipes. Your organization is probably digital already, but now is the time to make choices to become more digital leveraging the best business direction possible. Since digital allows for better outcomes in a speedy and agile fashion, some directions can be corrected in flight with today’s digital approaches leveraging decision management, more automation and no/low code approaches.  Many of these flexible digital technologies are embedded in Digital Business Platforms (DBPs)