Are Swarming Processes in Your Future?

Today processes are managed by some central control point that orchestrates and coordinates resources. This has worked well when the process was simple and structured in a stable world. Today process have to deal with many more and complex resources, some with intelligence built into them. At some point in time the complexity will be too much for pure central control and will move to a bidding situation where independent and autonomous resources will swarm to bid to do portions or eventually all of the work that a process might have controlled in the past. Imagine resources that will bid to do the work you have on your plate and swarm to help you reach your outcomes. 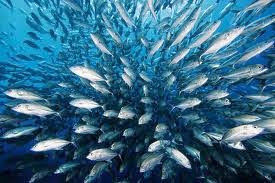 What is Swarm Behavior?:

Swarm behavior is the collective motion of a large number of self-propelled entities.[1] From the perspective of the mathematical modeler, it is an emergent behavior arising from simple rules that are followed by individuals and does not involve much central coordination, if any. It's kind of like a school of fish as they try to protect themselves from predators while they keep themselves feed while migrating to the waters that support the proper temperature.

How Will a Swarming Process Behave?

It will sense emerging patterns and behave accordingly while still seeking the goals set for the processes and staying in bounds from a governance perspective. The processes will be made of of competitive resources bidding to do the work in real time. The key is where the control of the winning bid will be determined. It will probably start with a central notion initially and migrate to a bidding agent that will determine the best change for outcome. It will take time for all involved to gain confidence in autonomous software and devices that work in concert for the good of the goals. We see this occurring in vehicles with ABS braking systems, smart transmissions, lane departure software, auto-stop capabilities, collision detection,  and auto navigation etc. Maybe when more of these work in concert, the autonomous car might be accepted, but bits of autonomy are creeping in over time. The same will be true for processes.